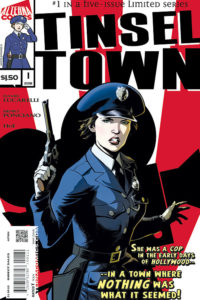 There’s been quite a bit of praise going for David Lucarelli and Alterna Comics’ first issue of Tinseltown. And after reading the first issue, I can certainly see why as there is great potential for this five issue mini-series! I dig that this is a story set in a time when women (and that David had inspiration for this where his own mother is concerned) weren’t as likely to get certain jobs. Or if they were, there was only a small amount of women who were working in those types of professions. I love that Abigail wants to be a cop like her dad and doesn’t have a mindset that it can’t be done. Though trying to get this going in a place like Hollywood is perhaps the wrong way to go about it since you can never be too sure of what’s real and what’s not. A certain ad our gal Abigail sees in the paper is proof enough of that. Though I’m looking forward to how David handles all that when it seems like she’s been cast in a role for a movie and doesn’t even realize it. Funnily enough though, the way things are described here, its kind of like she’s a security guard more then anything else.

And that’s interesting to witness once things get going, even though we don’t get to see much of that at first. Makes me curious if there was any female security guards in the era this comic is set in or of it was just all men only. I’m assuming that Henry Ponciano also covers the coloring duties in addition to the art duties and I have to say I think he does a great job on both. Hopefully he and HdE will be around with David on this until the final issue. I’m excited to see what happens next, especially with the cliffhanger David leaves us. As I want to know if what’s going on is real or not and how Abigail will respond to that. Especially given the anger she has in her over her lot in life after her father died and I’m curious if that will come to play as the mini continues or if a chance for revenge just won’t be a thing here. Abigail has a tough road in front of her and I look forward to seeing how she conquers it and show everyone she’s someone to respect. Whether its on her own or with her new found friend Frankie as she does so.

Editor’s Notes: Head here or to your local comic shop to grab yourself a copy!

Summary: In 1915, Abigail Moore became one of the first female police officers in Hollywood. But beneath the glamorous surface of Tinseltown beats a rotten heart full of corruption, greed, and lies, and Abigail’s about to dive head-first into all of it.