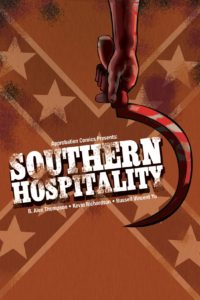 B. Alex Thompson’s Southern Hospitality to be quite honest… Is a far more serious take on the Horror genre mixed in with the Slasher genre compared to his work in Chaos Campus. And something Ross Rivers no doubt would enjoy considering his love of Horror and the surprise twists this book has that I wasn’t expecting. Makes me think that Horror/Slasher fans would love the Hell out of this if it was a movie! Of course, there’s always a good possibility this could get adapted into a movie. I just hope though that it would be as faithful as possible to the GN. The ending, along with the twists I honestly didn’t see coming, makes me want to go back and re-read the GN just to see if I can catch on to certain things quicker. Although, I’ve no desire to want to see the panel with a pair of fingers being eaten again as that was just one of the most disturbing things I’ve seen in a comic book. Although, I do have to admit that Kevin Richardson’s art here is somewhat… Off, where things like people’s heads are concerned. 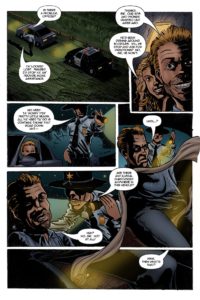 I don’t know if that was intentionally done or just his preferred style or what but to me, it seems like an odd choice for a Horror/Slasher comic book. As to me, it kind of takes away from the seriousness of the comic seeing people with oddly disportionate heads. Now I like the fact that Crissy, one of the three girls Nathan and Todd (our two main leading fellas) end up meeting isn’t some small girl. But that instead, she’s kind of a big girl. Making it kind of nice that Alex and Kevin chose not to go for a full on cliché of three incredibly hot girls with pure sex appeal in a Horror/Slasher story. And I love that despite the fact Nathan and Todd barely know one another, they still act like a pair of long time best friends. Kudos to Alex for successfully pulling that off as well! They’re the kind of pals you’d want to see more of as they banter back and forth and occasionally do so with others. Even if the bantering is somewhat crude at times. 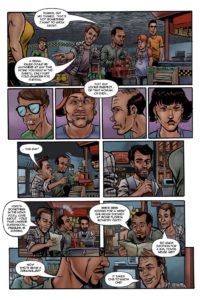 And given how this story starts off, the small towners our main duo and their lady friends meets are immediately suspect. Though how that plays out is an interesting twist on things that I was surprised by. Something I’m sure Alex had a lot of fun with as he wrote this story in order to keep folks guessing and perhaps plain surprised as you never expect certain things to happen. Though I’m curious as to how the unexpected killer whose identity we learn of, manages to be three other killers as that seems like a heck of a lot of work to pull off! And as much as I want to be a little more clear on things, that would end up spoiling plot points and I don’t want to do that. Even with this book being several years old as more then likely, there’s some who haven’t read Southern Hospitality yet. Though I can certainly imagine Todd’s gonna be pretty damned paranoid about who he trusts and allows to be near him in the future from now on!

Summary: Two businessmen and three college co-eds stranded in the southern backwoods try to survive in a town of misfits and a hulking slasher.

Can any of them make it back to civilization alive? Or will they be picked off one-by-one before realizing a worse threat is closer than they ever imagined?