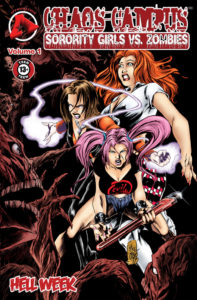 If you’re looking for a serious read where Zombies are concerned, B. Alex Thompson’s Chaos Campus: Sorority Girls VS. Zombies is not going to be that read. Though if you’re looking for something that takes the Zombie genre and turns it upside down on its head. Then Chaos Campus will be exactly what you’re looking for. I can safely say that this title is easily counts among the most ridiculous things I’ve read in comic books since 2012. This title not only flips the Zombie Genre on its head, but it includes all manner of cliches and pop culture references that I’m surprised there’s no full on nudity and sex scenes. And with the amount of artists present for Chaos Campus, I’m curious if Alex did that on purpose to allow a different style to be seen by readers who may not be familiar with the likes of Christian Duce, Martin Coccolo, Josh Cruz, Anthony Tan and so forth. This is a book that knows its not serious and is perfectly happy with that. Even it makes you want to roll your eyes at the cliché dialogue you mostly see from Jamie. One of our three main leading Sorority girls who serves as the story’s knowledge girl when it comes to Horror.

Along with being the muscle and strength that the girls need. Then you have Paige, a girl with bad taste in guys but is a voice of reason and the brain of our leading ladies. She’s also the kind of gal who wants to change a few things about herself for the better but I doubt being a Sorority would help with that. Course I could be wrong for all I know! Paige is also the girl who may be a bit mystical from the little we’ve seen and I’m curious if Alex intends on exploring that in the future of this series. Or if there even is more after the second volume. As it would be interesting (and probably cliché as Hell) to see that side of her explored, along with the necklace where the mystical aspect comes from. She’s also about the only girl present who seems to be wearing the most clothing, including a bra given how at attention just about every other girl in the story is. And then you have the stunning Redheaded and tall beauty known as Brittany. She’s the heart of the trio and kind of sex crazed. Which definitely causes some trouble later on in a house that isn’t gonna win any awards for being the most safest place on the block! Though what I’m curious about when it comes to Brittany is if she’s forever part Zombie or if Paige’s mojo cured that over time.

As we only see her being Zombie gal for a time and then its practically non existant for the rest of the story. And given how ridiculous this story gets with the cliches and wild moments here, I have to wonder how often it proved hard for Alex to write the story while possibly laughing his ass off. I will admit that one of the moments we see in Chaos Campus was the very clear nod to ICP and the Dark Lotus group they did with a few others back in the day. Hell that was one of the few things in this story that had me chuckling some over. And it was fairly amusing to see a take on Beavis and Butthead in the first volume of Chaos Campus. 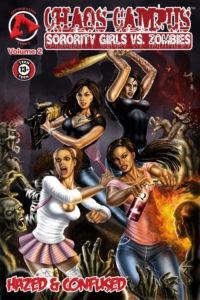 Christian Duce, Martin Coccolo, Josh Cruz, and Anthony Tan probably have the most serious art going in the beginning of volume 1. While the artists that worked on the rest of the art for the volume following the beginning, they seem to focus on a slightly less serious (cartoony like) look for the art. Which makes Paige for example look pretty different compared to the beginning. That might annoy some if they prefer the beginning art work compared to the work done by Leandro Tonelli, Emerson Lopes, Cary Lee Baker, Schimerys Baal, Robert Reichert, and Blake Wilkie in the ‘The Friendly Neighborhood Grab-E-Mart’ and ‘Gothic Makeover’ arcs that come after ‘Dead Man On Campus’. But its nice to see as we get to see their take on our lady trio who end up in one screwy situation after another. Case in point, a house that wants to eat them in volume 2. Volume 2 nicely enough gives us the return of a few characters from the early pages of volume 1. Along with a race cliché or two that most by now are familiar with when it comes to African Americans and Horror films. Though its nice to see that Alex decides to somewhat break away from one particular cliché! Tentacle porn even makes an appearance, only its in the form of vegetation and Brittany… Well, I think you guys can figure that part out.

Slashers, popular Horror books, cliches, fun takes on Wrestling abound in the second volume as our trio of girls fight to stay alive. And in some cases, fight to be free of possession! Though I am curious as to how Paige’s douche bag of an ex manages to switch out shirts considering he’s a Zombie! Of course that could be something that was over looked and not noticed until later. Like the use of ‘defiantly’ in place of ‘definitely’ for example at one point in this story. There’s so much that happens in this wild ride of Zombies, magic, a wrench, and a variety of cliches and as much as I would love to talk about it all, that would just ruin it for those of you reading this. So if you want something that doesn’t take itself seriously, B. Alex Thompson’s Chaos Campus: Sorority Girls VS. Zombies is for you!

Summary: Zombies have taken over the world and the only hope we have for humanity’s survival lies in the hands of three sorority girls – Jamie, Paige, and Brittany! Enjoy the fun side of a zombie apocalypse!