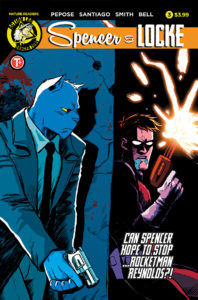 There’s not much that hasn’t been said about Spencer & Locke at this point. Simply put, it’s the best series out right now. I can’t think of any other recent comic of the last few years, that has hit all the highlights, both major and minor, of what makes a comic truly good. It has the works: Art, writing, atmosphere, pacing, and plot. It’s serious and dark yet light and fun. There’s a palpable sadness that lurks behind the cover of outright hilarity. (Most especially during the Bill Watterson-esque flashbacks to Spencer and Locke’s troubled childhood.) All very hard things to accomplish for any writer, let alone your initial foray into comics. Yet from the first page of the first issue David Pepose has gifted us with characters that feel instantaneously familiar, as if we’ve been reading about their adventures for years instead of a just a few issues. The third installment not only strengthens that foundation but reveals new psychological layers within one of our titular heroes.

I won’t spoil anything here. If you’re reading this it’s probably because you’re already familiar with Spencer & Locke’s unorthodox take on the buddy cop motif; of the emotionally scarred Locke and his stuffed, one-eyed panther partner and best friend, Spencer. This issue sees Locke kick a lot of ass and, while under the influence of a black market concoction of psychotropics and hallucinagenics forced upon him by his last issue’s kidnappers, relive an extremely harrowing confrontation with his abusive, alcoholic mother (okay, okay, maybe a bit of spoilage). All of which takes place while under the drug-induced perception that he’s Rocketman Reynolds, a, space-faring, make-believe creation from his childhood. Which will all make sense when you read it, so if you haven’t yet, hop to. You’re missing out on some fresh craziness.

Like the previous two issues, Pepose’s writing and dialogue here is refreshing to read. It’s taut and lean and propels the story forward without boring exposition that so many other comics are rife with (cough, Marvel). His pacing, for this issue and for the series as a whole, is at a level unparalleled, particularly within the confining format of a mini-series. He’s one of the few writers who use flashbacks as a successful narrative technique, one that actually enhances the story instead of draining it of momentum. And then there’s the one-two punch of Jose Santiago’s pencils and Jasen Smith’s colors–so completely perfect for Spencer & Locke that it becomes impossible to imagine it illustrated in any other fashion. There’s a handsome, polished rawness to it, and much like a Clash album or a 70’s-era Stones record, one that will be imitated often but hard to duplicate. And while, like those bands, it may not be the most technical work out there, there is a magic here in it not found anywhere else. 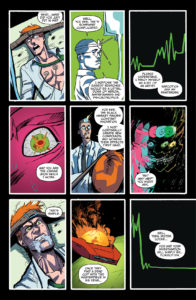 Maybe you think I’m gushing a bit too much. Maybe I think I’m gushing too much. The thing you should know is, I rarely ever gush. Spencer & Locke is a comic that makes you realize how lucky you are to be one of the few reading them. And when you’ve been reading for years, slogging through the heavy hitter “capes and tights” books and the endless reboots of the same old story because you feel like you just have too, well, sometimes you need the wake-up call of a series like Spencer & Locke. While everyone else is off waiting for the film or the TV series to be made, we were here first, in the monthly LCS trenches. Rare books like Spencer & Locke make it all worth it. Although I will admit, all praise aside, that there’s one very big problem with this issue: it signals the wind-down of the series, the unfortunate and inevitable end. But, if I had to guess, I’d say we haven’t quite seen the last of our wayward heroes, Rocketman Reynolds and his trusty sidekick, Pantharr.

Summary: S.O.S.! S.O.S.! Beaten, drugged and left for dead, things are looking bad for Locke—but unfortunately for his captors, Locke isn’t here anymore. Get ready for a night of psychedelic terror and homicidal violence as Rocketman Reynolds makes his daring escape from Planet X!