For some when it comes to making comics and getting them out there for us readers to check out, its easy. For others? Its a bit more difficult. Sometimes facing quite a few rejections before finally getting that one big break through. For Xing Xin, founder of Broken Hearts Productions: Somnia Eorum, that journey to getting the title known as Ximphonic Versus in front of people took on him on a journey of 20 years and over a hundred rejections from many a publisher before finally deciding to go it his own way. And with me today is the man himself as we speak all things Broken Hearts Productions and Ximphonic Versus!

1. Hi there and welcome to the Mind Meld! For those who may not have heard of you just yet, what can you tell us about yourself? 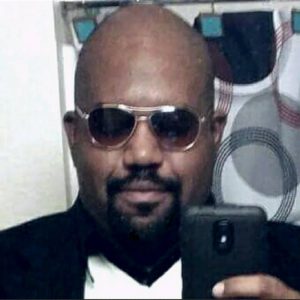 Hey Rob, I’m doing great how are you? And thanks for the interview. My name is Xing Xin, I’m the founder of Broken Heart Productions: Somnia Eorum. And the creator, writer and artist of Ximphonic Versus: Fabula Cristallum Thronus.

2. Always great to hear and I’m doing just fine! Now, I’m a little curious and I’m sure others are too, but what exactly does ‘Somnia Eorum’ and ‘Fabula Cristalium Thronus’ mean?

So glad you are doing well my friend. The latter part of the studio name, Somnia Eorum means “Those Who Dream”. My company’s goal is too help people remember how to dream and how important dreams are. Fabula Cristallum Thronus, is the theme of the series. It’s basically saying ” The New Tale/or Fable Of The Crystal Throne” and it has a much deeper aspect to it. And those deeper meanings are explored as the series goes on.

3. Ximphonic Versus has been a huge long term project for you for a fairly long while now, what led to its creation?

Yes Ximphonic Versus is something I have been working on now for 20 years. It’s a huge undertaking creating a world but it is very enjoyable as well. I have always wrote stories and drew the pictures even as a young child. I love to create fantasy and adventures for people to enjoy and myself as well. When I created this series it was almost like it happened by itself I know that may sound odd lol. And the kinds of stories I wanted to read were not out so I knew I had to write the kind of tale i wanted to read. That mixed with personal experience and struggles.

4. Hell yeah, I love the thought put into those names as they are pretty damn unique! I definitely get the desire to write out things no one else is doing as I’ve done it myself a time or two. And twenty years!? That’s a Hell of a long time. Is the world of Ximphonic Versus a huge one to have it take twenty years? 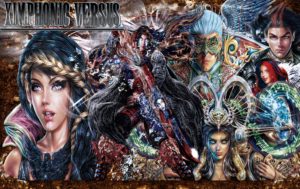 Yes the world of Ximphonic Versus is huge. The planet it’s self is 800 X larger than Jupiter. As far as the 20 years, about 10 years ago I could have released the book. However I wasn’t happy with how it was translating and although I could have put it out and people wouldn’t have noticed certain things, I saw them. And that’s not what I wanted for readers I wanted to ensure they are getting a quality that is of the highest standard.

It was extremely important for the art to match the depth of that story. So a lot of it was trial and error. Yet the aesthetic style of the book has always been centered around the same ideas. And it was important I felt that the art really set a tone and a standard for things you normally don’t see, especially in comic books.

5. One of perhaps the most unique things about Ximphonic is the art style. One that closely resembles that of a video game. What’s that process like? As I can imagine it takes time and effort to to do.

The art is such an important aspect of the book. I wanted the visuals to match the depth of the story. And my goal was to create a look and feel that has it’s own style. The process is very complex, lol that much is for certain. I want readers to get the highest quality possible, and I want to show them things they haven’t seen before.

6. Hell yeah, that’s pretty awesome! Now judging from a lot of things I’ve seen said from you, you’ve faced a lot of issues in getting Ximphonic Versus out to the public. Such as rejection from various publishers. Did those experiences ever make you consider throwing in the towel? Or did they make you push even harder?

XV faced a lot of challenges, it was rejected over 100 times. And its very difficult when editors continually say “NO”. And it wasn’t because what I was doing was wrong, it was just different. And people don’t always know how to accept change so readily. Many have thought comics can only be done one way, the way people do them. And XV is a very different type of series, and what I’m trying to do is not out their in the market. And at times it was disheartening to say the least, and I wanted to quit sometimes. However I always found myself right back it, right back to drawing and still pushing forward. And I learned more from my failures than any successes, It motivates you that is for sure.

7. Your experiences also led to you founding your own publishing company as well. Is there plans to bring other titles on board or will it primarily be just for Ximphonic Versus?

Yeah I wanted to create a label where other artists with amazing books could get a chance. And 7 new titles are signed up so far.

8. Well, I for one have to say that I’m happy you kept on with XV. As otherwise none of us would be getting to see the amazing art XV has today. And 7 new titles definitely sounds pretty great! What, if anything can you tell us about these titles?

Right now I can’t say to much about the other books. However updates are coming soon.

9. What do you personally hope readers will get out of their reading experience when it comes to XV?

I really hope people enjoy it and that it has an impact on them, I think you want to use certain things as a way of helping people. In life we deal with so much and sometimes people turn to influences that are not positive. Yet if a story or adventure, a Faraway place can bring some happiness or some joy or help someone to cope. Or to escape the things that they’re going through and it’s helped them, that’s what you wanted to do. It’s not just about how the story will fold out it’s what each person is taking away from the series for themselves.

10. Where are you hoping to see XV in say the next five years?

I don’t know what will be five years from now. The goal is to ensure readers get quality. And I hope the series will be a video game and live action film trilogy.

In addition to the TV show.

11. Hell yeah on the quality man, that’s always important! Now, the tv show. Let’s talk about that! You announced the news about this about a week ago, how exactly did this come about?

Honestly, the process was a little difficult. But it all worked out and the GGG,LLC have been very supportive and helpful. They see the value of what I’m trying to do and achieve. Even though so many publishers said NO, they said yes. And having a TV show is leaps beyond just having a published book. So in many ways I’ve already won.

12. What came to mind when you learned its happening?

I didn’t have any words or thoughts. I was just so blown away that I couldn’t believe it was happening. After all the setbacks and rejections and then boom! It’s now moving beyond comics and becoming something more.

13. Well Hell yeah man, what all can you tell us about the upcoming tv series? Will it be a one season only deal or a bit more then that?

I can’t say a lot on the series right now, but it will be more than one season. It has to be because the story is so big, one season couldn’t fit it all in.

14. If you had the chance to go back and do anything over again, what would it be and why? 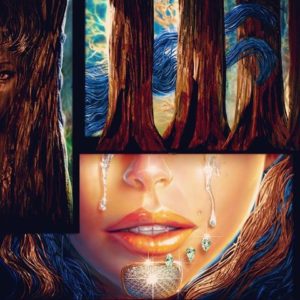 No, I wouldn’t change what has happened. Any other reality wouldn’t be this one and what is happening now may never happen. All the setbacks, well over 120 rejections from publishers big and small. Yet the book is not even out and it has achieved something bigger than just being published. I wouldn’t change anything, everything has led to these moments now.

15. As for my last question, what would your advice be for those just starting or are looking to get into the industry?

Nothing comes easy, but if you dig deep enough and keep going forward you will reach a brighter place. Don’t expect things to be easy, but use that to help forge the amazing ideas you have. Swords are perfected by Fire and Heat, not giving up. Stay hungry, stay humble, learn and study the master’s everyday. Don’t cut corners, don’t do what seems easy do what is difficult by standing out. And NEVER STOP TRYING, NEVER GIVE UP, PAIN IS YOUR FUEL.

Keep dreaming, never let go of your love for creativity.

Creativity does make the world go round after all! Thanks a ton for taking part in this interview Xing and good luck with all that you do!

Editors Note: Interested in checking out more of the amazing art featured in Ximphonic Versus? Along with the other mentioned projects? Then head right here to the Broken Hearts Productions: Somnia Eorum page!